We are pleased to announce the appointment of John Crawford as President and Chief Executive Officer... 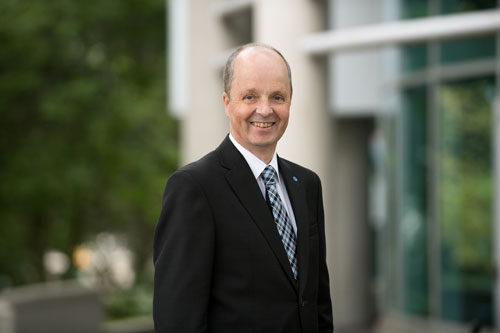 As a part of the Pacific Blue Cross family for three decades, John has been instrumental in continuously improving financial systems and business processes to enable Pacific Blue Cross to better serve the health care needs of British Columbians. Prior to being named Interim President and CEO in November 2017, John was the Chief Financial Officer and oversaw tremendous growth in the organization throughout his tenure.

In speaking about his new role, John stated “I am privileged and honoured to be the fifth President and Chief Executive Officer of Pacific Blue Cross. I was involved in the creation of the organization and look forward to leading our seven hundred local health benefit experts on a mission to improve health and wellness for British Columbians. Pacific Blue Cross will develop new products, services, and digital innovations to give our members access to the best possible health care. We will foster engagement with our clients, the advisor community, and a vast network of health care providers to improve health outcomes for our 1.4 million members.”

Known for his community spirit and outstanding contributions to the Canadian insurance industry, John also dedicates significant time to volunteering. The 2018 BC CFO Awards, presented by the Chartered Professional Accountants of BC and Business in Vancouver, recently honoured John with their first Lifetime Achievement Award in recognition of his philanthropy and professional success.

Richard Taylor, Chair of the Pacific Blue Cross Board of Directors, explained that “As Interim President and CEO, John has reinforced a strong financial foundation while improving member value. Under John’s leadership, Pacific Blue Cross will continue to work with our clients to serve the health care needs of our members while growing the business for the future.

Beth Miller, President of CUPE 1816 expressed her view that “After knowing John for almost thirty years, I can say his business knowledge and organizational roots make him the right person to lead and we look forward to collaborating on the success of Pacific Blue Cross.”

John was born and raised on the west coast of Scotland. After immigrating to Canada in 1979, he and his wife began raising their family in Prince George before moving to Vancouver. When he is not working, John enjoys travelling and walking his chocolate lab Maple.