But overall scores fall short of pre-pandemic levels due to more adverse impacts on people under 55 years of age.

As restrictions continue to ease across Canada and worldwide, British Columbians are feeling more hopeful than ever since the start of the COVID-19 pandemic.

A BC-wide survey done for Pacific Blue Cross by Leger in February 2022 shows that 70% of us are reporting a positive rating of their mental health, which is 13 percentage points more than last year at the height of the pandemic. 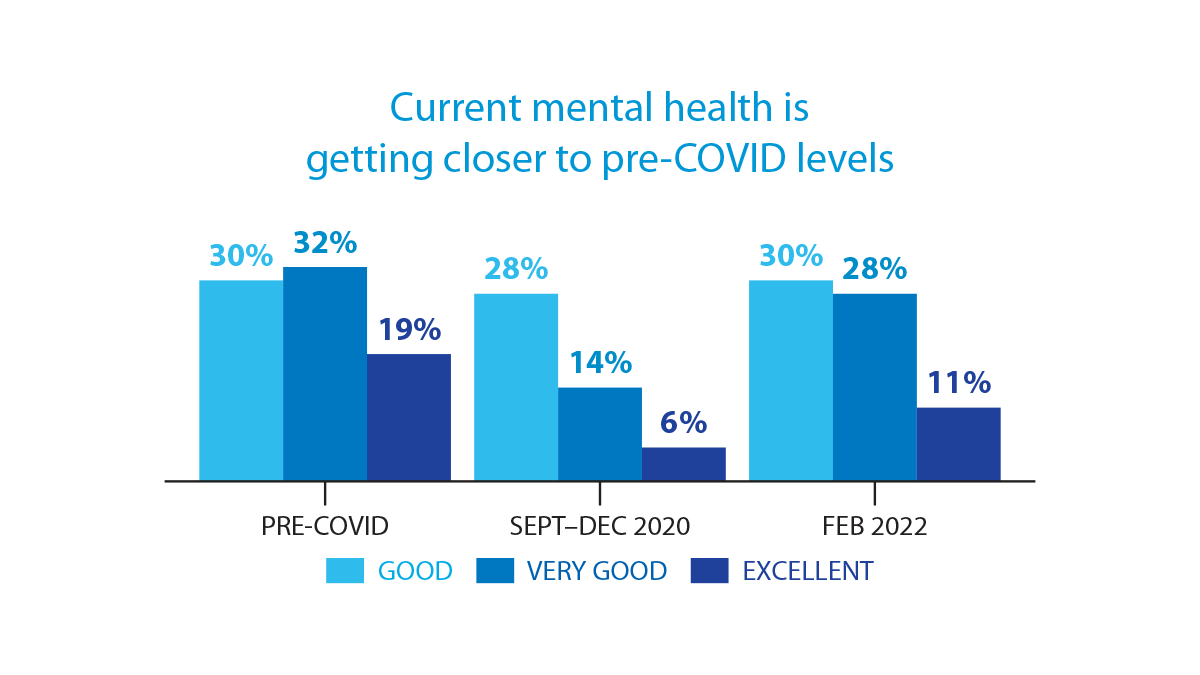 And the outlook is promising: 31% of survey respondents expect improvements in their mental wellbeing over the next few months. These are the most positive self-evaluated mental health levels we’ve seen since March of 2020.

According to Maria Watson, Counselling Manager at the Canadian Mental Health Association (CMHA), this is a fairly normal response to an abnormal situation. Feelings of sadness and stress during an event as significant and prolonged as global pandemic are to be expected, as is a lifting of these feelings now that life is getting back to a semblance of normal.

However, the recoveries have not been universal. The survey results indicate that people under the age of 55 scored their mental health significantly lower than those who are 55 and over, which stands to reason—there is evidence showing that the pandemic impacted younger people more than older people.  And we found a big difference in how different age groups addressed their mental health concerns.

Age and the use of mental health supports

Our survey data shows a marked difference between age groups when respondents were asked whether they considered using mental health services and tools in the previous six months. Of those aged 18-34, 58% used or considered using them. That number reduced to 45% for those aged 35-54, and fell sharply to 21% for those 55+.

Furthermore, in an analysis of our 2021 claims data, we found that those 55 and over were more apt to use prescription medications to address stress, anxiety, and sleep issues, while those under 55 tended to use more counselling services. In fact, 92% of claimants for mental health paramedical services (i.e. psychological counselling) last year were under the age of 55.

We need to break down barriers to care

Among the nearly 6 in 10 British Columbians who told Leger they recently tried to access mental health services of some form, more than two thirds said they had experienced one or more barriers. We’ve asked this question in previous surveys where affordability and stigma were the most prevalent barriers to care.

However, this time we wanted to know if barriers were still a concern for those who had employer-based or personal health benefit plans. We were surprised to see that over half of those individuals with employer-based plans—and 72% of individuals with personal health plans—weren’t totally sure if their plans provide benefits for maintaining, enhancing or treating mental health.

We also learned that the younger age group (under age 55) appears more receptive to using mental health tools and services, but up to four in five experience at least one barrier when trying to access care. Helping our members to understand their options is a crucial first step in reducing some of these barriers to accessing care.

There is help out there

But what do people do if they don’t have benefit plans that can help them with their mental health? “There are many accessible, low-cost counselling options in communities across the province,” says Julia Kaisla, Executive Director, CMHA North and West Vancouver Branch. “The provincial government has invested significantly in recent years to build and sustain these resources, which allows organizations like ours to provide innovative programs that meet people where they are.”

“A great example is our walking therapy program,” adds Watson. “Evidence shows that walking can improve sleep, mood, and energy levels, and walking and being outdoors contributes to better mental health overall. We’re all overwhelmed coming out of the pandemic; walking is a small thing we can do that can make a big difference, especially if we do it with friends or family.”

That’s why Pacific Blue Cross has sponsored events like the Vancouver Sun Run’s 10K Walk with Pacific Blue Cross, in which almost 3,000 people participated in the virtual event, completing the distance in their communities between April 15-24th. As we approach Mental Health Week on May 2nd, we want to encourage members and non-members alike to do simple things—like walking—as a way of practicing a little self-care.

Find a CMHA branch in a community near you.

Canadian Mental Health Week #GetReal about how to help.